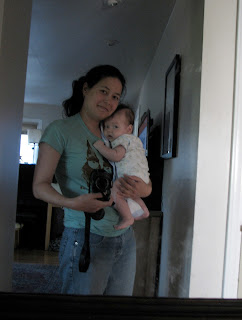 It's probably a good thing Buddha Baby hasn't arrived yet, because I feel so much more ready as of this weekend.

Friday was my last day of work--I had a couple weeks to train my new coworker (replacing my old coworker who left at the end of February and will be my coverage during my maternity leave).  Feels so odd to know that I'm out of there for 4 months.  I know I'll be working my butt off during that time, but I've never had that much time 'off' before--there's always been work or school or a combination of the two.

Darren finished rewiring the upstairs of our house!  I think he officially finished Tuesday or Wednesday of last week.  He absolutely rocks--has basically been working 2 jobs since the project started just about 2 months ago with some help from his dad some weekends.  Darren is not an electrician but has been studying up on the subject since we moved in as it was something he was really hoping to accomplish on his own (versus paying someone else up to 10K to do the job).  Our house was basically 85% knob & tube wiring.  All the upstairs has now been upgraded and when you live in a 1940's house this is huge.  We have access to 6 outlets in the kitchen now--we used to have access to 1 (move aside the dirty dishes to plug in the coffee maker, then move that aside if you want toast, or if you want to use the blender, or food processor...).  An outlet for our built-in dishwasher is in (yet to be installed).  We used to have an ungrounded outlet in our bathroom, right above our sink--um, that's a big no no.  A new light for our deck.  Recessed light in the closet that turns on with a switch instead of a bare bulb and pull string.  Additional outlets in the bedrooms...  In addition to wanting to be able to add insulation to our attic, we have been wanting to upgrade our kitchen.  Once we have our wiring inspected, we'll be at a point where we can focus on swapping out our current stove and rollaway dishwasher for a convection stove, gas cook-top (we had someone come in to take care of extending our gas line), and built-in dishwasher.  We've got a nice looking stand alone unit from Ikea which will hold our new stove and cook-top.  We'll put in new counters to replace our ratty linoleum counters we've put up with.  And we'll put in a new sink and faucet.  Fun stuff!

With the upstairs rewiring finished, Darren thought we should use this weekend to babify our house.  Great idea!  We were able to store some of our extra furniture at D's parent's house which made room for more storage in the basement and garage which meant we could clear out the extra boxes we had in the nursery.  The crib is now up and the space certainly looks more like a nursery/office instead of just an office/storage-of-a-lot-of-crap room.  I use the word 'we', but really it was Darren and his parents who dealt with all the moving of furniture and boxes.  I went to my yoga class as usual and spent a lot of time with my feet up on the glider.  Okay, I did fold a lot of baby clothes since a ton of baby clothes loads were done over the last few days since I finally purchased storage bins to organize the larger clothing we've been handed down and gifted.

The carseat is in the car too!  39 weeks 6 days is a good time to check that off the list, right?  It's a good thing Buddha Baby didn't come early with everything that has just recently been accomplished.  Is this how it goes for most expectant parents?  I see pictures of these 'perfect' nurseries on-line and wonder if these parents have that much more time/money than us or was it just a bigger priority (most likely a bigger house as well)?  I mean, our kiddo won't even be sleeping in his crib for a while as we'll be co-sleeping.  He won't care if the walls are red/tan for a while longer instead of yellow.  Or that we have a few extra piles of paperwork on the desk instead of nicely organized on wall shelving that hasn't been purchased yet.  Will he?

So, now that my maternity leave has started, will I get to enjoy it at all?  I have my 40 week visit tomorrow with the midwives.  Wonder if they'll be able to tell me if I'm any closer to actual labor.  I have a list of useful and/or fun things to do during maternity leave:  take care of officially changing my last name (it's only been 6 months since we got married), get the car seat checked out, get my brows done, go swimming, read up on patching drywall holes (oh wait, that was another thing that Darren and his Dad worked on this weekend so I can check that off my list), nap...
Posted by Seattle Yogi at 9:00 PM No comments:

I am 38 weeks along today!  Most women deliver between 38-42 weeks and Buddha Baby probably would have been just fine even if he had decided to make an appearance in the last couple of weeks, but at this point it's just a waiting game.  I hear this gets harder as you approach and pass the due date.  Most women deliver past their due date for their 1st child, but I hope I'm not like most women!

Posted by Seattle Yogi at 6:00 PM No comments:

I went in to get a professional fit for nursing bras.  2 firsts for me as I've never been officially measured by a 'bra fitting expert' and I've never needed to purchase nursing bras before.  I have purchased a few maternity and sleep bras in the past couple of months, but as I've heard it's worth it to spend money on nursing bras, I wanted to make sure things were going to be a good fit.  Word of caution, nursing bras can be very expensive!  I walked out of Nordstroms with 2 nursing bras and $140 charged on my credit card.  $140 on 2 bras!!  Most popular styles, but really?!   Will be performing a little experiment to see how similar styles of a $16.99 Gilligan & O'Malley bra from Target and the $58 Elle Macpherson nursing bra from Nordstroms compare.

Of course I expected to get a bigger rack during pregnancy, but ahem, wow.  And I'll get larger after Buddha Baby arrives?  Yowza.  I never thought I'd be seeing the letters DD or E on my delicates before.

One brand I've been told to check out is Bravado--I guess Village Maternity at U-Village carry this brand and it only costs around $50.  As I'm all about comfort, would prefer to avoid underwire, I may need to check out nursing camis, but I guess it will depend on how supportive they are.  Lots of great nursing bra comments and tips on this offbeatmama post.
Posted by Seattle Yogi at 9:40 PM 1 comment:

70 more days to go according to my weekly Babycenter.com e-mail.  I'm now 30 weeks along and Buddha baby is about as heavy as a head of cabbage, ~3 lbs, and ~15.7 inches long.  I can certainly tell he's getting bigger. Other than the growing baby bump, his movements are much larger and pronounced now.  If only I could tell what was what.  There's usually a hard bump on the upper left part of my belly, maybe his bum?  And I'll be able to tell when he's moving a knee or an elbow around because it's a 'sharp' little knobby bump.  When he's super active, it's fun to just sit there and stare at the action going on in my belly.  Have felt Buddha baby with the hiccups twice over the last week or so, very normal in fetal devlopment

I have started feeling Braxton Hicks contractions.  They're not painful, but do cause the whole uterus to contract.  Mostly random though there are times when I get them quite frequently (probably when I'm too active or stressed?).

Something I'm now dealing with more often now, is heartburn.  :(  About a month or so ago, would get the rare attack, now it's happening much more often and is really uncomfortable.  Yay hormones and a crowded abdominal area.

Can't believe there's only 10 more weeks to go!  Not feeling particularly nervous about the delivery.  Not a fan of pain in general, but I'm reading all I can about pain management techniques and look forward to covering those in the birthing classes which start at the end of the month.  I do worry about the length of labor in general and getting to that point of exhaustion.  Have been reminded I've run a half and full marathon.  Instead of the mantra 'keep on running, keep on running' as I did during that training, I'll just use 'keep on breathing, keep on breathing' or something along those lines.  And at least I'll have my lovely D with me along for support.

Have plenty to do on the home front.  Darren is starting the house rewiring project today.  Hope to be finished with the rewire and our mini kitchen remodel in 2 months.  Keeping my fingers crossed we/he doesn't run into too many snags.  Those that have done any major projects on their house can laugh now.  :)  Somewhere in there, the nursery will be painted Dusty Yellow (no-VOC!), the crib will be put together,  shelving will be added to the wall, I'll have decided on a cloth diaper system, I'll finalize my maternity leave, daycare will be figured out for November...
Posted by Seattle Yogi at 6:00 PM 1 comment:

Haven't had a lot of nesting instincts yet, which I think makes D a bit disappointed (was probably hoping I'd start to pull more weight around the house with the cleaning and purging of stuff).  I have lists going of things I want to do, but can't seem to muster up the energy most of the time.  Last Sunday, I was up early, don't think it was even 7 AM yet.  Let the dog out, got myself some water, then noticed the kitchen windows were dirty.  Pulled out the windex and cleaned the windows above the kitchen sink.  I even had to pull out a stool to clean the top pane.  If only the rest of my day had been as productive as those first few early morning minutes.
Posted by Seattle Yogi at 6:00 PM 1 comment:

I've heard women can become forgetful during pregnancy (afterwards as well?).  Not sure if I can blame it on the baby, but the other day at the end of brunch it was time to pay the bill.  I look through my purse and can't find my wallet, check my jacket pocket, check my purse again.  Mention to D, that he may have to pay for us, when I notice that my wallet is open right in front of me on the table--I had already pulled it out of my purse and just needed to grab my credit card.  A few days later, we're heading out to the car, I'm looking for my keys in my purse, then in my pocket, ummmm yeah, my keys are in my hand.  Maybe I'll just blame these instances on a full belly and lack of sleep, respectively.
Posted by Seattle Yogi at 6:00 PM No comments:

Where to find me